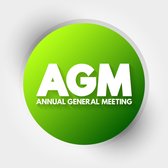 Notice is hereby given that the Annual General Meeting of the Selby Rugby Union Football Club will take place on WEDNESDAY 11th AUGUST 2021 at 7 pm in the Clubhouse.

Nominations for positions as Officers of the Club must be seconded and received by the Club Chairman not later than Wednesday 28th July. Email nominations to secretary@selbyrufc.com.

A summary of reports from members of the Board which are to be presented at the AGM and proposed amendments to the Members’ Handbook are available on request via the following link: AGM Registration

Are you attending?
Join to set attendance
You need to join this club before you can set your attendance
3 members attending