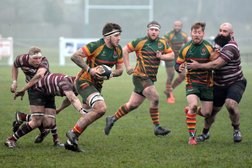 Selby’s disappointing run of form continued with a late loss to Halifax-based Old Rishworthians, although the Swans came agonisingly close to pinching the win with the last play of the game.

On a bright and sunny day in late September Selby gave Rishworthians a bit of a thrashing at their place but at a misty and murky Sandhill Lane on Saturday the visitors were a different kettle of fish - and with both teams looking to open play up the early skirmishes were even and entertaining. An excellent kick and chase by fullback George Stoker earned a penalty and 3-0 lead to Selby after 10 minutes before Rishworthians burly prop earned himself a sine die ban from the Front Row Union with a blistering 60 metre break upfield that included swerves and hand offs, as well as a couple of Maori sidesteps! The Swans’ defence held firm though and with their scrummage, not for the first time this season, dominating their opposition, Rishworthians attacking options appeared limited – although their pack, and back row in particular did a manful (and rearward job) in salvaging what ball they could.

Whilst Selby struggled to take advantage of their scrum dominance in attack, they never looked like having their line own breached, but their disciple was poor and a number of consecutive penalties gave Rishworthians influential fly-half, Josh Kelly, a number of cheap kicks at goal, one of which he converted for a fair enough 3-3 at half-time.

Selby’s lack of penetration in attack continued throughout the second half and while they did try to play some entertaining rugby by spreading the ball wide, this rather played into Rishworthians hands - as when they did gain regular possession from Selby errors, they played a much simpler, more effective (if somewhat less adventurous!) game, which involved Kelly launching towering bombs deep into the Selby half at every opportunity. Rishworthians were gaining good territory and possession for very little effort, and while Selby’s scrummage got them out of trouble on a number of occasions the percentages had to tell - and from another Selby dropped ball, Rishworthians Ollie Martin picked up the pieces to scoot under the sticks for 3-10 five minutes into the second half. With Selby looking bereft of ideas they suddenly put together a sparkling series of handling moves, for centre Alex Webster to send winger Harry Kelly on his way for a great try and 10-10 with only ten minutes of the second half played.

Rishworthians though stuck to their simple (and successful) aerial bombardment formula, and after more Selby confusion under another steepling kick they regained possession and then simply, but very competently, set up Kelly for a regulation drop-goal and 10-13 lead with minutes remaining. Selby didn’t give up though and marched back up field to batter the Rishworthians line and replacement Jamie Dentith came desperately close to the winning touchdown – only his arms are six inches too short unfortunately! So, Selby’s disappointment was countered by the pleasure of Rishworthians large band of travelling supporters, who drank lots of beer and who deserved their winning beer and happy bus journey home!

Selby now take on Old Crossleyans away on Saturday - and any point gained from the match will surely be a bonus!