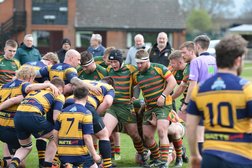 Selby cemented fifth place in Yorkshire One by defeating fourth-placed Bridlington at home on Saturday - although in allowing the visitors to score two late tries, earning them two losing bonus points, they seriously dented their chance of overtaking them after the final league game in two weeks’ time. And it may just be important as, following league restructuring, fourth place guarantees promotion while fifth is only a probability and dependent on circumstances elsewhere, and out of Selby’s own hands.

Anyhow, any win over Bridlington is a good one and in front of a bumper sponsors’ day crowd both teams gave it their all in a game that while maybe lacking a bit of quality, made up for it with buckets of blood and thunder. Selby were much changed with ongoing and new injuries and Bridlington were also fielding a makeshift team with their considerable and colossal antipodean cohort having migrated home for the winter. New faces then maybe but same old Bridlington I’m happy to report, as the ‘replacements’ put in a typically feisty, aggressive, and fully committed Bridlington-like effort right up to the final whistle - and that includes their supporters too (only joking!).

Selby started as brightly as the weather, spreading the ball wide at every chance and after a good break by winger George Stoker down the left the forwards took it on for Sean Campbell to dot it down over the line, but without confirmation by the unsighted referee who, fair play, can’t be everywhere at once and has no slow-mo replay. No matter though as more good play saw Alex Webster cross shortly after for 7-0 after five minutes.

While Selby’s attacking play was admirable their defensive efforts were less so, and the Bridlington full-back was making full use of the space and time the Swans were affording him, to find good field positions with two 50-22 kicks - which Bridlington then didn’t squander as they cashed in with a penalty and then a try to take the lead at 7-10. Back came Selby though as Bridlington cocked-up the re-start, allowing whippersnapper scrum-half Archie Bennett to duck and weave his way over from the back of a scrum 20 metres out for a fine individual try, and 12-10 lead.

Selby were now looking well on top with only slack handing and their own mistakes preventing them stretching their lead. Great handling down the line put Dan Reid over in the corner but, yet again, the simplest of final passes was forward - and other good chances to score were similarly wasted as Selby failed to hang onto the ball in contact. Finally though weight of possession had to tell and Ben Bell crossed after a spell of forward pressure for 19-10 shortly before half-time. Selby failed to deal with Bridlington’s kick-off though (after you Claude!) and Bridlington then taught Selby how to protect the ball by recycling it through numerous phases until they did score – and then then closed the gap further by doing the same again until they earned a penalty for 19-18 at half-time.

Selby were straight on the attack again from the re-start and despite some fantastic last-ditch tackling from the East Yorkshiremen, second row Jamie Ibbetson squeezed in at the corner for 24-18, and the four-try bonus point. Another ex-Selby colt, Tom Scholefield, then crossed the whitewash for his first-team debut (taking the number of ‘home-grown’ players for the day to 15 out of 18!) as Selby continued to press - but so their profligacy continued likewise as more chances went begging, until a superb driving maul from the forwards sent hooker Charlie Thompson in to stretch the lead to 31-18. And when Wright slotted a penalty near the end for 34-18 it looked that Bridlington’s game effort was over.

Only it wasn’t as Bridlington simply wouldn’t lie down. Deep into injury-time they worked their way upfield to score their third try - and then straight from the restart they repeated the trick, with Selby powerless to stop them, to score their fourth try (from probably only four appearances in the Selby 22 all match) to earn the two losing bonus points that probably guarantees them the fourth-placed promotion spot, with Selby fifth.

Selby’s final match this season is away at local rivals Pontefract on 23 April, kick-off 3:00pm – and where no matter what is at stake, a tough game is guaranteed.